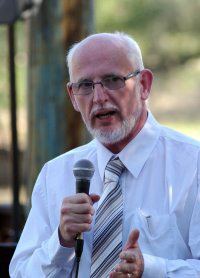 Biography: Aled comes from Trawsfynydd, Gwynedd. He was a pupil at Ysgol y Moelwyn, Blaenau
Ffestiniog and a student of History and Theology at St David’s University College, Lampeter. He
undertook pre-ordination training at Trinity College, Bristol and was ordained a minister of the
Church in Wales in 1979. Following his time as a curate in Glanogwen, Bethesda, Aled served as the
parish priest of Llandinorwig with Penisa’rwaun, Botwnnog (where he was also the Community
Pastor) and Eglwys Dewi Sant, Cardiff. In 1999, Aled became Cytûn’s first National Assembly Liaison
Officer. During his time in that post, he wrote Transforming Power: A Christian Reflection on Welsh
Devolution (2001) edited From Protest to Process: Stories from the National Assembly for Wales
(2003) and co-wrote Considering Contrasts and Futures: A Faith Reflection on Devolution (2004). In
2006 Aled became Cytûn’s Chief Executive. Aled has a strong interest in issues concerning asylum
seekers and refugees, race relations and equalities and human rights. He was Chair of the Welsh
Refugee Council (2005-06), a member of the Equal Opportunities Wales Advisory Committee, and
was Wales’ Commissioner on the Commission for Racial Equality (2006-07). He is Chair of Displaced
People in Action, one of Wales’s most active asylum and refugee organisations, and is a member of
the Wales Committee of the Equalities and Human Rights Commission. In June 2006 Aled received an
OBE for his charitable services in Wales. Aled is married to Marie and has three children. Among his
personal interests are politics, rugby, football, the American Civil War and The West Wing.

‘Faith in an Emerging Wales’

Abstract: Canon Aled Edwards will explore the creation narrative, the story of the Tower of Babel,
the Incarnation, Pentecost and the vision of the New Heaven and New Earth as being pertinent story
telling for a rapidly changing Wales and a modern world shaped by populism. He will explore the
drive in modern politics towards uniformity asserting that for the Christian faith ‘difference is
irreducible.’ He will also seek to explore the place of ‘truth telling’ in the modern Welsh Christian and
interfaith experience and how that integrity challenges the ‘othering’ of minorities and the
vulnerable.