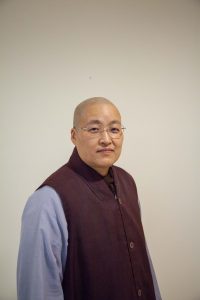 As a Buddhist nun, Wu Ping worked for the Dallas Buddhist Association, Texas, U.S.A from 1992 to 1998, with the Amitabha Buddhist Society of Singapore from 1998 to 2001 and the with the Pure Land Learning College Association in Australia since 2001. As of today, she has been learning Buddhism for more than twenty-six years from Venerable Master Chin Kung.

Furthermore, Wu Ping has assisted in translations including Buddhism: The Wisdom of Compassion and Awakening; Changing Destiny: A Commentary on Liaofan’s Four Lessons; A Life of Sincerity and Respect; Essence of the Infinite Life Sutra; Guidelines for Being a Good Person.

Wu Ping began to participate in interfaith activities since December 1998 in Singapore. She followed the Venerable Master Chin Kung to visit Singapore major religions and helped to invite other religions to introduce their faiths at the Singapore Buddhist Lodge. She has been residing in Australia since 1999, where she participated in visits to different religious leaders in Sydney, to the Catholic archbishop, the Uniting Church in Brisbane, and Toowoomba faiths and community leaders. She attended many interfaith forums, women’s forums, and peace forums at UNESCO, France. Next to this, she worked as a Volunteer Chaplain at the University of Southern Queensland, Australia; member of the Toowoomba Interfaith Working Group; member of the Goodwill Committee of Toowoomba; and Dharma teacher in both English and Chinese at the Pure Land Learning College Association.

Currently, Wu Ping works on a project examining the value of filial piety in different traditions at UWTSD.

1986    Obtained Bachelor of Engineering at the Chung Yung Christian University,