Centre for Advanced Welsh and Celtic Studies,
University of Wales

Biography: Martin Crampin has worked on a series of research projects concerning aspects of visual
culture in Wales at the University of Wales Centre for Advanced Welsh and Celtic Studies in
Aberystwyth, including the ‘Visual Culture of Wales’ and ‘Imaging the Bible in Wales’. He has
developed a particular expertise in the study of ecclesiastical art and this also forms the primary
focus of his artistic practice, which is based on patterns and images found in the medieval decorative
arts of Wales. He has been recognised as the leading expert on stained glass in Wales and published
his Stained Glass from Welsh Churches in 2014. Martin is currently part-time Research Fellow at the
Centre for Advanced Welsh and Celtic Studies, working on the ‘Lives of the Welsh Saints’ project. 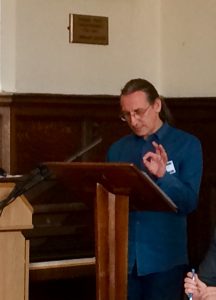 ‘Art from Churches in Wales Touched by other Faiths: Some Examples’

Abstract: This short contribution will introduce a couple of examples of artworks in Christian
churches in Wales that have been influenced in some way by other faiths, either through the agency
of the patron or the personal choice of the artist. I will also briefly consider some of the tensions
between different traditions over figural imagery, and suggest ways in which we might perceive
common ground in abstract religious decorative art, opening up possible avenues for interfaith
dialogue.